For ACC, the treatment that offers the best chance of a cure is timely surgery by a specialist surgeon experienced with ACC surgery. This can be achieved if the tumour is localised (just in one place). Follow-up is essential however even if ‘curative surgery’ is thought to have been achieved. Even after complete removal the tumour can recur, and your doctor would want to ensure that he/she caught any recurrence in good time. Unfortunately, ACCs can be quite fast growing. They are often diagnosed in the later stages (when they are quite advanced) and this means it can be difficult to cure them. Nevertheless, even if surgery cannot remove all of the tumour, it may sometimes be helpful to reduce the volume of the tumour(s) to allow other treatments to be used.  Surgery can also be a useful option after other drug treatment has helped to shrink the tumour.

ACCs are rare and treatment should be carried out by specialist teams. Specialist centres that offer surgery and other therapies for adrenal cancer will have a ‘multidisciplinary team’ that meet regularly to discuss ACCs. These days, all decisions about surgery and other treatments should be taken by a team including a number of doctors of different specialities rather than one individual doctor. You should make sure that you have been referred to a multidisciplinary team experienced in caring for patients with ACC and other adrenal tumours.  .

As part of your treatment, your doctor may suggest:

If your cancer is diagnosed early enough, surgery to remove the cancer and the adrenal gland is the first choice of treatment and can cure the cancer. This operation is called an adrenalectomy. If your surgeon thinks the cancer may have spread locally, they will remove the tissues immediately surrounding the adrenal gland together with nearby lymph nodes. When tumours are large they may have grown into surrounding structures such as the liver or kidney.  In these cases surgery may still be possible but the operation will be larger.  Even when the tumour has spread (metastasised) to other organs, it may still be appropriate to remove the initial tumour first and then remove or treat other metastases later.

The type of surgery that your surgeon will use will depend on the type and size of the tumour and also your individual needs. There are different surgical approaches that can be performed to remove malignant ACCs.

Open adrenalectomy – Most frequently, surgeons will make either a horizontal, diagonal or vertical cut to open the tummy, to remove the tumour. Since the tumours are often large, the incisions need to be large too. Sometimes surgeons use an incision in the side just below the ribs.

Laparoscopic Adrenalectomy – in this ‘key-hole surgery’ operation, a number of small cuts are made in the tummy through which operating instruments and a camera are inserted. This is the preferred approach for small benign (non-cancerous) tumours since it is a smaller operation and generally causes less pain and a shorter hospital stay than other approaches. However, for ACC this is not usually either possible or appropriate and ACCs are usually better treated by a conventional open operation. Laparoscopic adrenalectomy may sometimes be used in cases where the tumour is fairly small and it is not clear if it is a cancer or not.

Complications and Consequences of Surgery:

Hormone production – if one adrenal gland is removed, the other gland is usually able to take over making all the hormones you need.  Some patients can experience a delay in this happening, and may need replacement steroid hormone tablets for a period of time, until the remaining adrenal gland is working fully.  These tablets will also be needed if you are given mitotane after surgery, since this drug stops the remaining gland from working.

Infection – as with any surgery, there is always a risk of infection in the wound or of the chest.

Bleeding – this can happen during or after surgery.  Sometimes you may wake from the surgery with a drain from the wound to help with this.

Your doctor may suggest a drug called mitotane (Lysodren). It works by killing both normal adrenal cells and cancer cells. It can also stop the remaining adrenal gland from working, meaning that replacement steroid hormone medicines are needed while mitotane is being used.  Mitotane can be given in four different settings:

Treatment of persistent or recurrent disease

If the initial surgery is unable to remove all of the tumour or the tumour returns later, Mitotane has been proven to reverse the disease and can sometimes lead to complete remission for years. Most doctors would be cautious about claiming that it can ‘cure’ the condition in this situation. Mostly, Mitotane will be continued for life.

There is evidence that mitotane may be useful in preventing cancer returning after ‘curative surgery’, i.e. if all tumour tissue appears to have been successfully removed. This applies in particular to ACCs considered to have a relatively high risk of returning as judged by examining the tumour tissue obtained at surgery under the microscope. In this situation, it is usually recommended to start a course of two to three years of mitotane treatment, which should start within 12 weeks of the surgery. If the tumour is judged to have a relatively lower risk of returning, then usually the patient is given the choice between close follow-up (observation only) and treatment with mitotane as for this situation no clear evidence of what to do currently exists. In all instances, patients after apparently complete removal of the ACC will be followed by regular blood and urine tests and usually CT scans.

In some patients the disease is advanced and no surgical treatment can be performed. In this situation, chemotherapy may be used to shrink the tumour(s) and this can be monitored by a scan. In such a situation your doctors may not only recommend chemotherapy but also mitotane; however, this depends on individual circumstances.

Sometimes steroid hormones that cause problems, such as too much cortisol or too much testosterone, remain high after surgery or when surgery cannot be done. Mitotane may be helpful to control the hormone levels and prevent distressing symptoms.

Mitotane may be used alongside chemotherapy. Mitotane can also treat the symptoms of advanced adrenocortical carcinoma. You take mitotane each day as a number of tablets (often 6-12).

Side effects of Mitotane

Side effects are common and include nausea, tiredness and feeling dizzy.  Nausea can often be controlled with anti-sickness pills and other side effects can usually be controlled by using a lower dose of mitotane.

“I’ve been tolerating mitotane fairly well so far, mostly nausea and fatigue that waxes and wanes…good days and bad.”

Mitotane kills normal adrenal cells and the normal hormones that these would make need to be replaced with tablets. All patients on mitotane require replacement of the normal cortisol levels using hydrocortisone tablets. Hydrocortisone needs to be taken at all times even if mitotane is temporarily stopped or paused. When mitotane is being used in the adjuvant setting (as a temporary therapy to prevent tumour recurrence) and it is stopped after two to three years, the function of the adrenal gland may sometimes recover, but hydrocortisone needs to be continued until blood tests prove that the patient does not need it anymore.  Patients on replacement hydrocortisone must be aware of the ‘sick day rules’ of this medication (see box). 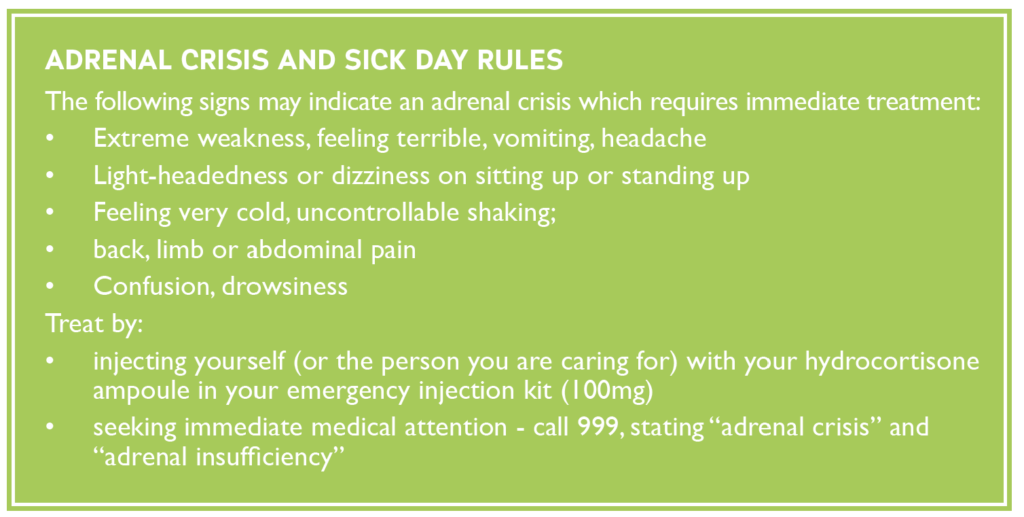 Sometimes patients on mitotane also need replacement of the blood pressure hormone aldosterone, and for this reason will also have to take fludrocortisone tablets. Your doctor will check whether you need fludrocortisone by measuring your blood pressure whilst sitting and standing and by carrying out blood tests.

Mitotane is effective if the level in the body is controlled to a particular level (14-20mg/L). This needs blood samples to be taken every 1-2 months to make sure that the level is high enough to kill the cancer cells, but not to cause side effects. Your doctor will advise you on side effects to be expected from mitotane treatment. If mitotane blood levels are too high the function of the brain can be affected causing problems often described as “trouble talking and trouble walking”. This side effect is fully reversible when mitotane treatment is temporarily stopped or the dose is reduced.

Radiotherapy uses radioactive beams to kill cancer cells and prevent or delay disease recurrence.  It is usually only used when a large ACC has spread beyond the adrenal glands, in particular to the bones.  In this instance, Radiotherapy often helps to control the growth of the bone lesions and to ease pain. An MRI scan is used to plan the radiation field, and then the treatment is given by pointing the radiation beam via 3 targets to focus on the area of disease. This is quite painless, and is usually given for 5 days a week over 5 weeks, giving 25 treatments altogether. Each treatment usually lasts half an hour, and most patients can carry on their normal life throughout although they may tire more easily than usual.

Side Effects of Radiotherapy

If you feel very suddenly tired and sick, you should contact your medical team straight away as this can be a sign of anaemia (low levels of red blood cells).

Chemotherapy uses anti-cancer (cytotoxic) drugs to destroy cancer cells. It is given by slow injection through a vein.  You may have just one drug or a combination of more than one drug. Chemotherapy is usually only used to treat ACC that has spread to other parts of the body.  It is given in a number of cycles of treatment, with time for recovery from side effects between each one.  Your doctor will discuss how many cycles of chemotherapy you may need.  Chemotherapy can be used in several different ways:

Chemotherapy is given on its own when it is expected to control or cure the cancer; it can be given as a short-term treatment or for long-term disease control.

This is used in this manner to decrease the risk of the cancer coming back. This is done even when no clear evidence of cancer can be found, but certain factors (e.g. metastasis to the lymph nodes, large tumour size) predict an increased risk of cancer recurrence.

This is used to shrink a tumour before surgery, which may allow the surgeon to perform a smaller surgery and/or remove all visible tumour.

This is the practice of using chemotherapy together with other treatments, such as radiation or surgery or mitotane. Therapies are combined to obtain a greater response rate than could be achieved with a single type of treatment. Today, using combinations of treatments is common for most cancers. Your doctor will discuss which options are suitable for you.

Some of the chemotherapy drugs used to treat ACC are:

In some cases the use of one single chemotherapy treatment is not as effective as combining two different treatments together. Examples of combination treatments are:

Side Effects of Chemotherapy

Short Term – Chemotherapy is very toxic and because it affects both cancer cells and healthy cells in the body, it can cause a number of side-effects, including:

Most side effects get better within a few days after each cycle of treatment.  In addition, other medicines may be given to help lessen them.

Long Term – Most side effects go away after treatment. However, some may continue, come back, or develop later. For example, some types of chemotherapy may cause permanent damage to the heart, lung, liver, kidneys, or reproductive system.  Some people have concentration and memory problems for months or years after treatment.

For patients who have had the whole tumour removed, the following tests may be done afterwards on a regular basis:

For patients who have not had the whole tumour remove, or who have disease that has spread and cannot be removed by surgery, scans and blood tests may be done on a regular basis according to the extent of the disease in each individual case.