Adrenocortical carcinoma (ACC) is often known simply as adrenal cancer and affects 1-2 people per million per year, making it a rare form of cancer.

ACC in adults tends to occur in people in their 50s and 60s and is more common in women than in men.  Most ACC’s are sporadic (meaning that they do not run in families), but they may sometimes be part of a congenital (present at birth) and/or familial (passed down in families) condition.

What are the Adrenal Glands? 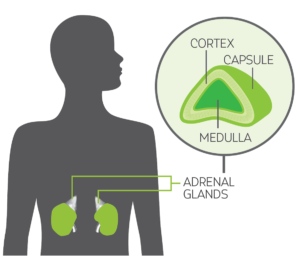 The body has two walnut-sized adrenal glands, one above each of the kidneys (‘ad-renal’ means ‘next to the kidney’). Even though the glands are small they are important as they produce several hormones (the body’s chemical messengers) that are important for life.

The adrenal medulla (the inner area of the adrenal gland) makes a number of hormones called catecholamines, mainly adrenaline and noradrenaline. These hormones help the body to maintain blood pressure and deal with sudden stress or threats.

The adrenal cortex (outer area of the gland) makes hormones called steroids, mainly cortisol (also known as glucocorticoid) and aldosterone (also known as mineralocorticoid).  These steroids help the body to maintain blood pressure as well as salt and sugar levels. Cortisol is also an important messenger in our bodies’ response to stress and illness.

The body is made up of hundreds of millions of living cells. Normal body cells grow, divide, and die in an orderly way. During the early years of a person’s life, normal cells divide faster to allow the person to grow. After the person becomes an adult, most cells divide only to replace worn out, damaged, or dying cells.

Cancer begins when cells in a part of the body start to grow out of control. There are many kinds of cancer, but they all start because of this out-of-control growth of abnormal cells. Cancer cell growth is different from normal cell growth. Instead of dying, cancer cells keep on growing and form new cancer cells. These cancer cells can grow into (invade) other tissues, something that normal cells cannot do. Being able to grow out of control and invade other tissues is what makes a cell a cancer cell. Carcinoma is the medical term used to describe tumours that are cancerous and malignant (having the ability to spread and invade other tissue).

In most cases the cancer cells form a tumour. Tumours can be benign (not cancer) or malignant (cancer).

When cancer cells from solid tumours get into the bloodstream or lymph vessels, they can travel to other parts of the body. There they begin to grow and form new tumours that replace normal tissue. This process is called metastasis.

Different types of cancer can behave very differently. For example, lung cancer and breast cancer are very different diseases. They grow at different rates and respond to different treatments. That is why people with cancer need treatment that is aimed at their own kind of cancer.

Throughout this website, where we use the term ‘tumour’, we are talking about a malignant growth within the adrenal gland, known as Adrenocorticol Carcinoma or ACC for short.